How to play Tute

In Casual Arena it’s possible to play with 2 players (Havanian Tute), with couples (Classic Tute) and Tute Cabrón (3 or 4 players). You can choose between matches of 1, 2 or 3 rounds, and allow or not to call Tute. 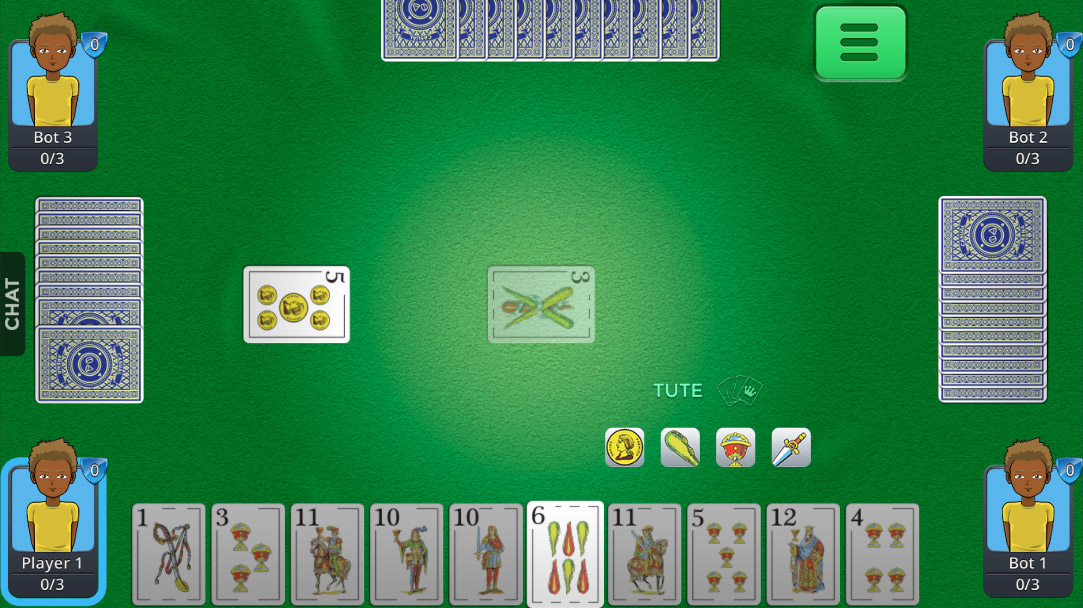 Value of the Tute cards

It’s played with a 40-card deck and each card has the following value:

How does a match start

The player that starts the first hand is chosen randomly. The next hands and rounds are started by the player that won the hand before.

In the more than 2 players modes every card is distributed. In the Havanian Tute (2 players), only 16 cards are distributed and the rest remains on the deck. On this mode in each new hand each player gets a new card from the deck until there are no more cards left.

The initial card distribution is done in the following way:

The last card of the deck is used to declare the trump suit and is called trump.

Each round is divided in several hands or tricks. In each hand the player that starts defines the suit that will go on hand. The following players must discard a card following several rules in order of priority:

Playing a trump card on the beginning is called “dragging”, since you force your oponnets to play trump cards as well.

In the Havanian Tute (2 players) in the other hand, you can play freely while there are cards on the deck to distribute. After that it will follow the same rules.

The player that played the trump card of a higher value, wins the hand and gets the points corresponding to all the cards played on that trick. If no trump card was played, wins the card of the highest value of the initial suit.

By starting a new hand, the player who won the hand/trick has the right to do a call. His companion can also do it at that moment.

You can do a call when you have a king and a knight of the same suit. If you have the 4 knights or the 4 kings you can call Tute. Calls follow these rules:

Just like Briscola, in the 2 players mode it’s possible to change the trump card if you have own the previous trick and if:

The person that wins the last trick gets 10 additional points.

In this mode each couple sums the points of its players to decide which couple wins each round.

A draw can be achieved by having all players accepting a draw proposal. In case of a points draw, the person that is the hand wins. If the draw is not between the hand and other players, then the person closest to the hand (to the right) is the winner.

You will be able to play Tute on 5 different rooms in Casual Arena: Passport, Tourist, Priority, Business and Luxury. Every room is accessible by all players after a certain level requirement is met.

The amount of points you get on each room depends of the amount of players on the match, as you can see on the following table: